TL;DR: CocoaPods 0.36 has been released, with the long-awaited support for Frameworks and Swift.

CocoaPods 0.36 adds support for dynamic frameworks, and with that it also brings enhanced support for dependencies using Apple's new programming language, Swift. This has been one of the largest singular changes in CocoaPods, affecting almost all of CocoaPods' subsystems such as Xcodeproj.

And there were Swift & Dynamic Frameworks on iOS

At the same time Dynamic Frameworks were introduced on iOS, Apple also introduced Swift. If you have third-party dependencies in Swift, you have only two choices: Either throw them in your project and compile one fat binary, which is no practical solution as this increases build times by limited availability of incremental compilation and makes it hard to generically manage very different dependencies, which could require different build settings etc. Or you can facilitate frameworks. Static libraries are not an option anymore.

Why is that the case? Because Apple doesn't let you build static libraries that contain Swift. Unlike Objective-C, Apple doesn't ship the Swift standard runtime libraries with iOS. This decouples the language version from the platform version. When you build an app with Swift, you're responsible yourself to ship them. By default, Xcode uses swift-stdlib-tool to handle copying the Swift runtime dylibs, but the tooling falls short when attempting to ship frameworks that use Swift with an app that is Objective-C only. Your app executable and the frameworks you ship will all use the same set of dylibs, which are embedded into the Frameworks subdirectory of the application bundle. First, that's because you can't link against different versions of the standard libraries. Furthermore it is desirable to embed them only once and not multiple times, because of constraints to memory size and network speed, which are relevant for distribution.

With this release, we initially allow you to use both in combination with CocoaPods. You can make CocoaPods integrate to your project via frameworks instead of static libraries by specifying use_frameworks!. If that's not present, you won't be able to integrate dependencies, if you depend on a pod which includes Swift source code. This is an all or nothing approach per integrated targets, because we can't ensure to properly build frameworks, whose transitive dependencies are static libraries. This release goes along with probably one of the most drastic changes of the whole project, which includes CocoaPods itself, but also required similar changes to Xcodeproj as well.

So what's the difference between those both product types?

Another difference is their file system representation: Frameworks are bundles, which basically means that they are directories, which have the file suffix .framework and Finder treats them mostly like regular files. While libraries are just single FAT-binaries, which can't carry any resources as distinct files. If you tap into a framework, you will see a common directory structure: 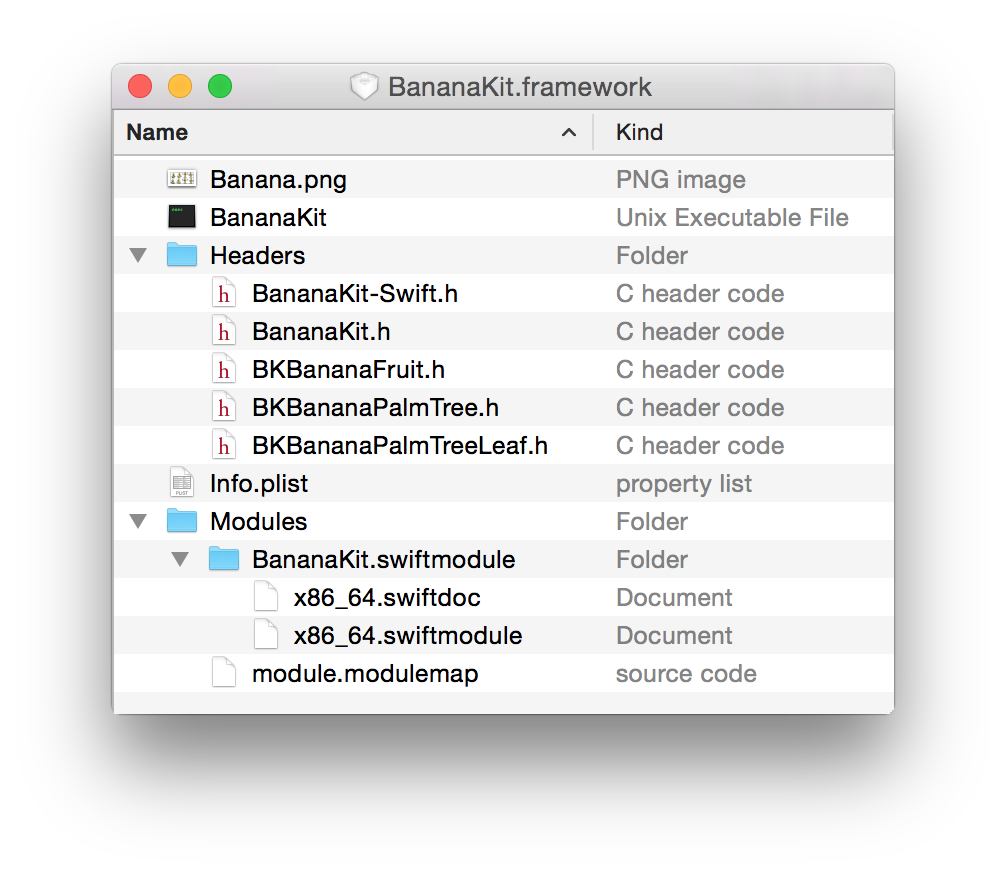 They bundle some further data besides a binary, which is in that case dynamically linkable and holds different slices for each architecture. But that's only part, which static libraries covered so far. Belong the further data, there are the following:

One caveat about bundling resources is, that until now we had to embed all resources into the application bundle. The resources were referenced programmatically by [NSBundle mainBundle]. Pod authors were able to use mainBundle referencing to include resources the Pod brought into the app bundle. But with frameworks, you have to make sure that you reference them more specifically by getting a reference to your framework's bundle e.g.

This will then work for both frameworks and static libraries. There are only very rare cases, where you want to reference the main bundle directly or indirectly, e.g. by using [UIImage imageNamed:].

The advantage to the improved resource handling is that resources won't conflict when they have the same names. They are namespaced by the framework bundle. Furthermore we don't have to apply the build rules ourself to the resources as e.g. asset catalogs and storyboards need to be compiled. This should decrease build times for projects using Pods that include many resources.

@IBDesignable - Another Reason for Frameworks

Xcode 6 allows you to preview your own custom view components in Interface Builder. To make use of that, the view component must live in its own framework.

If you want to learn more about Frameworks, take a look into the Framework Programming Guide. Even though this was not written specifically for the new Cocoa Touch Frameworks, how Apple calls them in their Xcode target template, those are mostly the same to the classic OS X frameworks, so this document is still a helpful introduction.

On a last note, another change in this version is regarding private spec repositories.

In CocoaPods 0.36 and onwards, when using pods from private spec repositories, you will need to explicity list all the spec repositories that are used, using the source directive in your Podfile.
This is important for ensuring everybody in your team uses the same reference of specs whatever their local configuration is.

Note that if you don't use private pods (and only use pods from the official spec repo), you don't need to list any source as this will defaults to only using CocoaPods/Specs.

For all the details, don’t miss the Changelog!